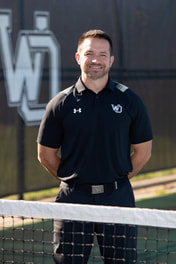 Coach Metz just completed his 5th year as the Men's Varsity Coach at West Ottawa Tennis. He played tennis at Comstock Park and then attended GRCC where he played tennis for a year. Upon graduation from GRCC in 2008 he enrolled at Grand Valley State University. Coach Metz earned his Bachelor of Science majoring in Physical Education K-12 Professional Instruction and minoring in School Health Education in 2011 from GVSU. In 2018 Coach Metz completed his Masters in Education with a concentration in Technology from Augustana University.

In 2013 Coach Metz was hired at West Ottawa to teach physical wellness courses at both the High School and both Middle Schools. It was during this time that he got involved in the tennis programs. In 2014 he lead the middle school girls team to their first undefeated season in school history. In 2015, 2016, & 2017 Coach Metz coached the boys junior varsity. During this time he also assisted Coach Schwallier with both the men's and women's varsity teams. In the winter of 2018 Coach Metz was hired as the Men's Varsity Tennis Coach.

At West Ottawa, Coach Metz currently teaches at Waukazoo Elementary and Lakewood Elementary. Coach Metz has been married to his wife Courtney for 5 years and are parents to Amilia (2 years old)